Let me start by saying that this is one of the best books I have ever read. 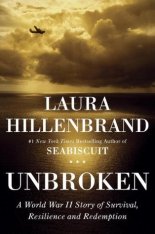 UNBROKEN: A World War II Story of Survival, Resilience, and Redemption by Laura Hillenbrand, is #1 in New York Times’s Bestseller list and will soon become a motion picture. It is a biography of Louis Zamperini, an airman who suffered the unimaginable in the hands of the Japanese, as a prisoner of war.

Top 4 reasons why I loved this book:

I give this book 5 out of 5 stars! So go and buy it, or downloaded, or whatever you do to get a hold of your copy. Hurry!